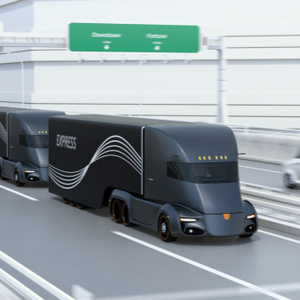 There are several key players when it comes to self-driving technology in both the United States to China. A lot of attention has been given to autonomous vehicles (AVs) for personal use, but the game-changing technology might have the biggest impact in the trucking industry.

With the shortage of truck drivers, the introduction of AVs into the trucking industry will not only save money but mitigate driver shortages.

In China, China Post and Deppon Express, two of the largest delivery and logistics companies, will start making package deliveries using AVs as early as April 2019. FABU, a self-driving startup, described it as the first time self-driving vehicles will be put into commercial use.

Founder and CEO of FABU, Xiaofei He, said that “FABU is very excited to be at the heart of the first autonomous delivery trucks in China.” With plans to expand the self-driving service to 100 routes in the near future, both China Post and Deppon Express have been pleased with the partnership.

Testing began in November 2018, in China’s heavily populated Zhejiang Province. It is recorded that the tested AVs successfully drove over 2,000 miles and delivered over 60,000 parcels.

Daimler, the parent company of Freightliner Trucks and Mercedes-Benz, plans to launch an Oregon based automated truck research center soon. Tesla is also making an impact in the way commercial AVs are seen, with plans to put a truck on the road in 2019.

The Impact AVs Have on Trucking Jobs

There is little for those in the trucking profession to be worried about when it comes to AVs replacing jobs. As more autonomous trucks are put on the road, there will be a greater need for drivers to be in those trucks. Leading innovators say that there are too many incidents that could occur with the technology for a CDL driver to be absent during routes.

The biggest changes in the trucker profession would be in training. With technology, a strong tech background would be required to perform duties safely and efficiently. It is projected that the added jobs will level out the jobs that would be ‘taken away,’ due to driverless cargos. Local drivers would still be needed in the industry since most AVs would be used for long-distance trucking.

There are plenty of opportunities for new roles within the industry, including: global autonomous truck-port workers, local street navigators, near-field communicators, and managerial logistic employees.

TruckLogics is here to help! Sign up for a 15 free trial with TruckLogics and see how we can help you! There’s no obligation and no strings attached.